News Archive | RSS Feed
MCW Cup Draw
18 Oct 1999, 13:41
DF-Mesmer
Link Item
The draw for the group stage of this season's MCW Cup has been made. DFC are drawn in a group with UTI, JAMS and the much improved WZ. The first 2 games are on Wednesday 27th October - see Fixtures page for further details.

WZ and UTI are solid 2nd Division clans which will provide us with difficult opposition. JAMS are newcomers to MCW, so we've little to go on there.

As ever, there will be practices on the Sunday and Tuesday before the game.

The UT 3dfx demo came out last night. Faster and chunkier than the beta it's real hectic 2 play the moment :))) (partly because most servers support 12 players on maps designed for 6 or so.)

BW ftp has the correct version (322) so snag it from there . CYA on a server soon


DFC Bow out of MCW
16 Sep 1999, 10:02
DF-Mesmer
Link Item
It looks like DF have finished their MCW season, with the final two games being defaults. QC have been defaulting all season, so we have no game on the final week.

This season has been a bit of a disappointment following last season's Div4 win, with half of our games being defaults (and getting stuffed in 3 of the 4 games we actually played). After reading Bif's mail re the future of the MCW, I have to agree - modem gaming will not last much longer. A single unrestricted ping league is definitely the way forward if QW is to remain popular at all.

DF have played their last ever MCW game, but would happily take part in a new unrestricted league, preferably on a day other than Wednesday :) (argueably our two best players cannot play on Wednesdays - bit of a bugger really)

The other direction that DF could take would be to try a different game. After playing an early beta of Unreal Tournament for quite some time, I have to say that it has great potential. The weapons are cool (I love the rocket launcher's ability to fire 5 at once :)), and there isn't all the obscuring fog and smoke that Q3 seems to possess. It's clean and fast, and I believe it will appeal greatly to QW die-hards. I believe the next test version is out today - Reubs..... :)

I would once again like to thank the MCW admins for their work over the years. To receive abuse and no-shows week after week for no reward must be commended.
Also thanks to the DF members who turn up for every game, even when it's only to collect the default. It's very annoying when clans don't have the decency to let you know they'll be defaulting - cheers lads.

MCW Season 8 Fixtures Out
5 Aug 1999, 08:25
DF-Mesmer
Link Item
The schedules for the new MCW season have been published, with DF opening their Division 3 campaign against Insomnia Resurrected on Wednesday 11th August.

We've had some good games against IR in the past, so this should be a good opener.

Ever wondered what some DF'ers might be up to on a Friday? Of course not, that would be really sad, but here it is anyway. Soon after we installed IRC where many of us work this happened.

The new MCW season starts August 10th. Time to wipe the dust (or whatever) off your mice and modems and get back into practice.

Also BT has announced it's beginning it's ADSL roll-out (perhaps) so feel free to join in the LPB party all :)

Check out this IRC log that some DFs knocked up whilst bored on a friday afternoon at work. Who said British industry was full of lazy incompetant morons just filling in the time eh?

DFC Win MCW Season 7
16 Jun 1999, 21:57
DF-Mesmer
Link Item
DF finished their season in style, with good wins over GM and iC. Of the two games, only one was of a serious nature - cheers GM :)
When iC realised they were well beaten, they played their usual childish trick of only using axes. This not only trvialises the game, but it makes for a waste of time for the other team involved. Tossers.

That said, DF went through the season with a 100% record - a big thanks and well played to all clan members for a superb effort :) 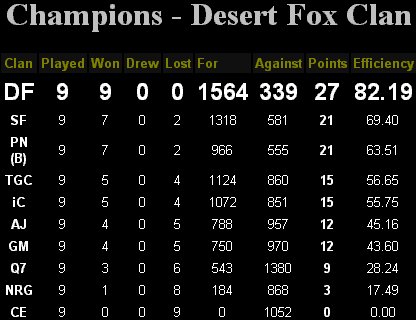