Reubs in Ladder Bullying Shocker
23 Feb 1999, 10:52
DF-Mesmer
Link Item
Things are looking good for DF-Reubs ladder position. How can this unbelievable state of affairs be? BULLYING of course. Certain lower ranked ladder people have commented that as soon as they get online Reubs appears as if by magic. This situation will be monitored by the anonymous ladder overseer :)

MCW Season 6 - Week 1
4 Feb 1999, 12:15
DF-Mesmer
Link Item
DFC lost their first match to DV. A somewhat brief match report is available.
On a happier note FOTW has been updated at last after Wij's 2 bouts of flu.
There will be no praccy with MM this Sunday because most of DF are off round to DF-Lynx's for a game and beer session.
Finally KillaBean has been accepted into the DF fold after chalking up his first win in the ladder.
That is all :)

Ladder Going Strong
9 Jan 1999, 11:46
DF-Mesmer
Link Item
The DFC Ladder has recently witnessed its 150th match, however this is in part due to the bullying campaign that DF-EvilGoblin appears to have embarked upon. Goblin has played our Ladder newbie, Killerbean, 4 times in the past week or two. This will be tolerated no longer.

Gulf War Begins
17 Dec 1998, 08:43
DF-Mesmer
Link Item
At 10:00pm GMT last night, the US and Britain launched an air assault on Iraq. The codename for this airstrike is 'Operation Desert Fox'.
It can be no coincidence that this name was chosen. 'Desert Fox' has become synonymous with devastating tactical advances into emeny territory, and this campaign is no exception.
We can only hope that teamplay 3 was in force when the wayward cruise missile landed in Iran. 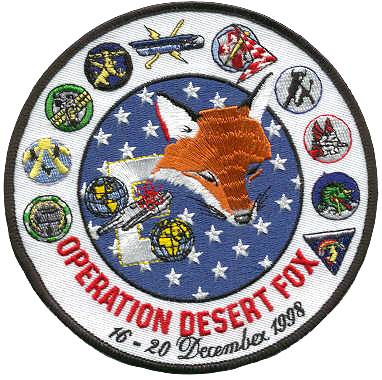